GO STRAIGHT TO THE RECIPE

Peeling onions with my Dad, Garth, for the annual pickled onion making session is something that I remember with great fondness.The funny thing is that I remember many things by family reference. Like sitting on the back doorstep with my great grandfather grating horseradish and weeping like our cat had been killed! We also always remember when Dad, who had recently discovered dried chilli made pickled onions so hot we had to invent new ways of using them!

In the vinegar for four days and already, at any excuse, we’re taking them out on the vague pretext of trying them, just to make sure they haven’t gone soft. They are as sort of pearly pink colour with the finest definition of layers in pale purple, they are exquisitely crisp and savoury. We steal hunks of salami from the coolroom, hot crusted white rolls from the baker’s ovens, smother them with lashings of salted butter to eat with them, and knowing I’m supposed to set an example, I wonder guiltily will there be any left for the rinded mature cheddar and pickled onions we are planning for the bar and suspect I’ll have to come in and make more.

During his life my father Garth, left the kitchen to my mother, yet, he perfected one thing in the culinary world – the most perfect, most crisp pickled onions. While he was alive, I’d never been able to weasel the recipe out of him, it was his one piece of expertise where there had been no intrusion by women.

He took especial pleasure in watching my chef and restaurant friends scoff his pickled onions and marvel at their excellence. He always requested the return of the huge glass onion jars and returned them a week or so later filled to the brim with pickled onions.

Of course, we all had theories as to why they were so good, none of which, as it turned out, were right.

Over the years his presentation changed as he added chillies and fresh bay leaves to the jar. His first experiment with chilli was a total disaster, and much to all our annoyance rendered the annual pickled onions totally inedible. Not a chilli eater himself, he had added to the jar some fifty or so tiny dried jalapeno chillies. They were so impossibly hot one couldn’t even breathe the aroma from the jar without having a choking and coughing fit.

Next year he redeemed himself with lovely long, fresh red chilli flowers arranged in a band. It must have taken him hours and we were suitably impressed, the onions had just the right amount of chilli bite, and the chillies themselves were delicious. My colleagues were mystified when in need of a recipe I didn’t rush to the computer, but to the phone.

Anyone who makes pickled onions, including my previously inadequate attempts to circumvent the need for my Father’s recipe. His recipe is exquisitely simple, yet he had clear rules which my late mother, Fay, insisted were the secret of his consistent success. 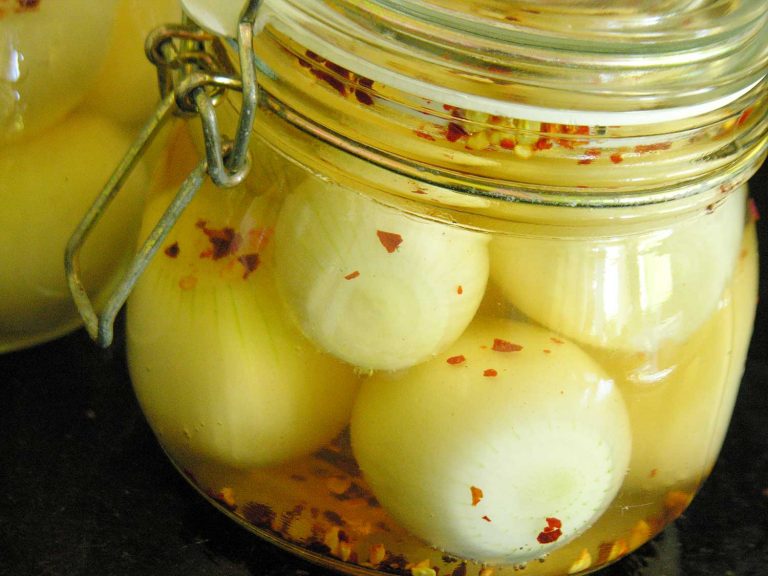 you have
to start
with
perfect
onions 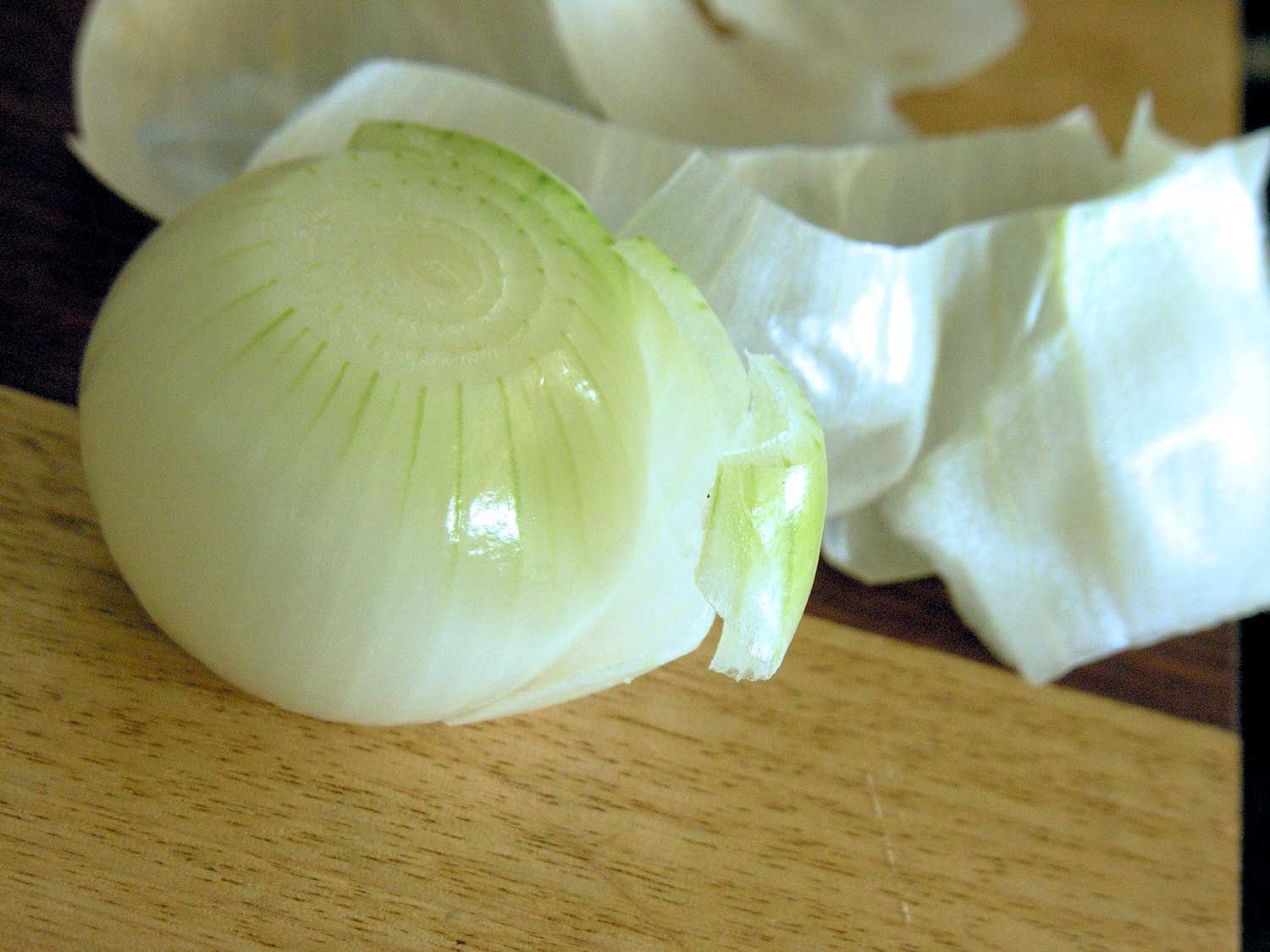 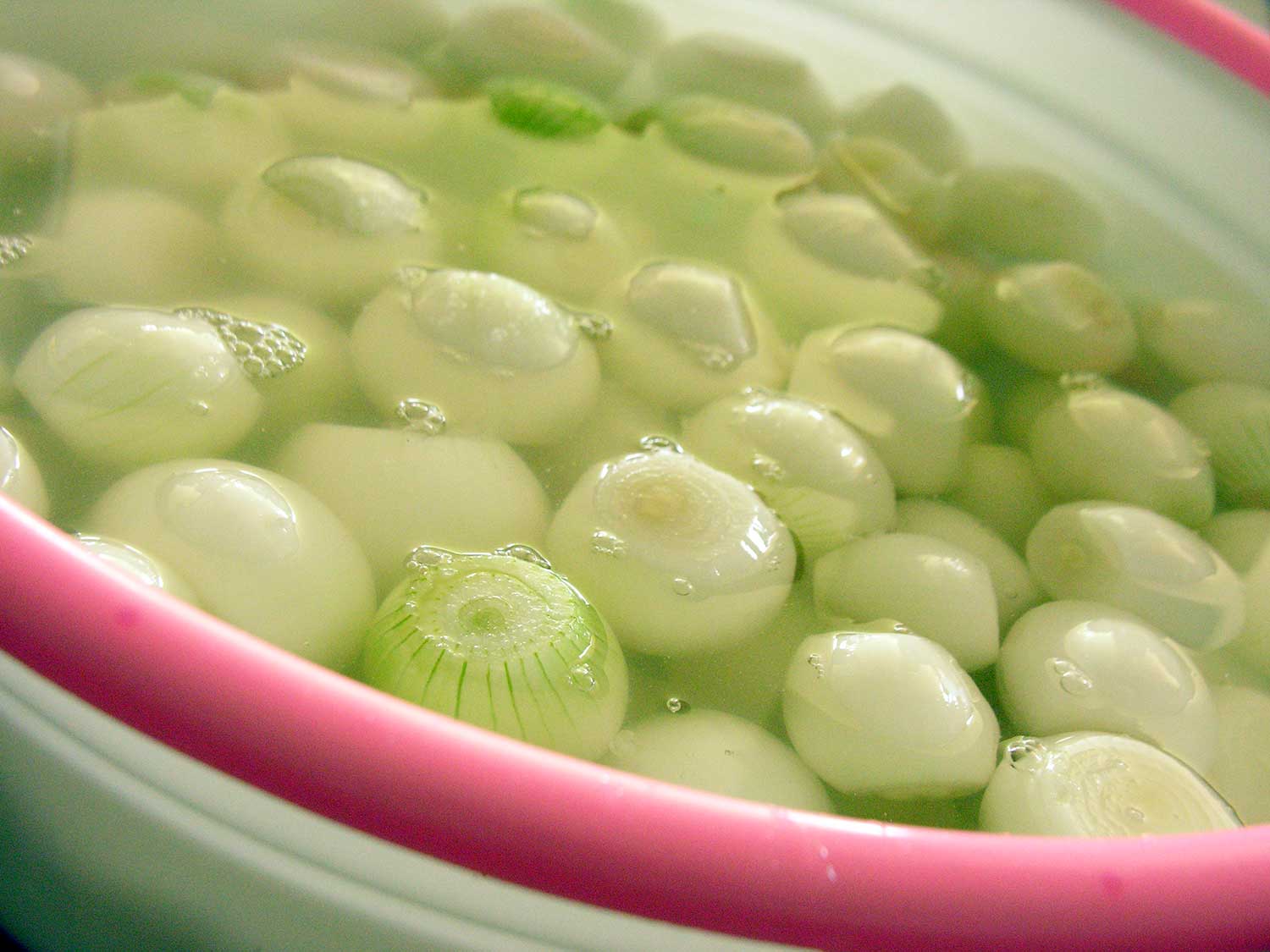 Peeling
is a
rule
TO BE
OBEYED

The onions must be small and very firm to the touch. The first skin must be removed, and the outer layer of the prepared pickled onion must be unbroken – not cut in any way. If you accidentally nick it, remove another layer. Put the onions into a non–corrosive container, add half a cup of salt for every 2kg onions and cover with cold water. Weight the onions under the water, cover and refrigerate for 24 hours. Drain the onions and dry them with a clean cloth and pack into sterilised jars, then cover with cold Vine Valley Spiced white wine vinegar, optionally adding a little dried chilli.

Alternatively you can use plain Vine Valley white wine vinegar, or any other quality white wine vinegar and add whole black pepper, bay leaves and whole pimento to the individual jars or infuse the vinegar with your own spice selection, but make sure it is completely cold before pouring over the onions.

The pickled onions can be eaten after four days but are best left for three weeks.

tip There are always plenty of small onions around, but they are not always suitable for pickling and by mid June, finding pickling onions of a suitable quality becomes almost impossible. In the Southern hemisphere mid November to early December is perfect. 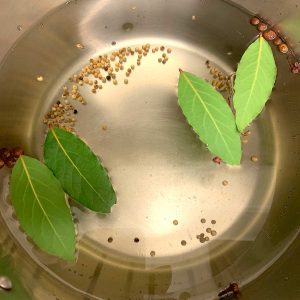 Weigh everything in a large stainless-steel pot with a lid. Place on low heat and bring to a simmer. Immediately turn the heat off cover with the lid and allow to sit overnight.

[1] We note that this vinegar no longer says ‘white wine vinegar’ meaning an assumed lesser quality, however, the taste remains pretty much the same and we have stuck with it. 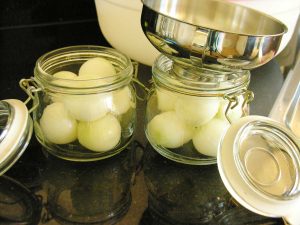 Is a sort of heaven that times in perfectly with apple cucumbers and the first tomatoes of the season. But with leg ham any time. For me our sour dough, slathered with butters some hot or fennel cacciatore [traditional] and pickled onions is heaven.