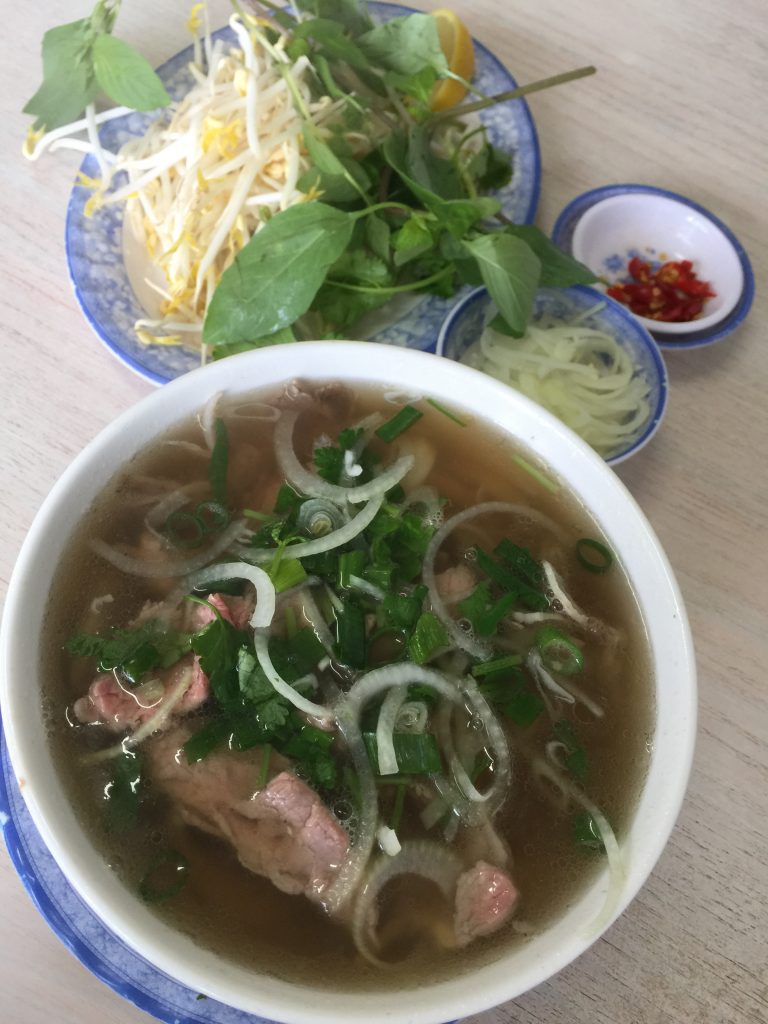 Pho Minh is without doubt Adelaide’s best pho. A tiny suburban restaurant shoved in the corner of a funny small, rather grubby suburban shopping centre I have been eating there at least once a fortnight for the past twelve months. A swimmer at the nearby Parks Swimming Centre it is my reward for swimming at least five times a week rain hail or shine.

In the past few months of the vile cold winter of 2018, the windows have been frequently fogged and the inside still slightly chilly, despite the fact that Pho Minh has still been most often been packed. You can expect to queue Saturdays and Sundays between 11.30 am and 1.00 pm even when it’s raining….and if you are lucky enough to immediately get a seat, be prepared for community seating. Their patrons understand the need to move on quickly so the wait is never long. There are not too many ‘round eyes’ eating here and the sounds of slurping noodles are comforting…join in, it’s considered good manners and the only way to go! 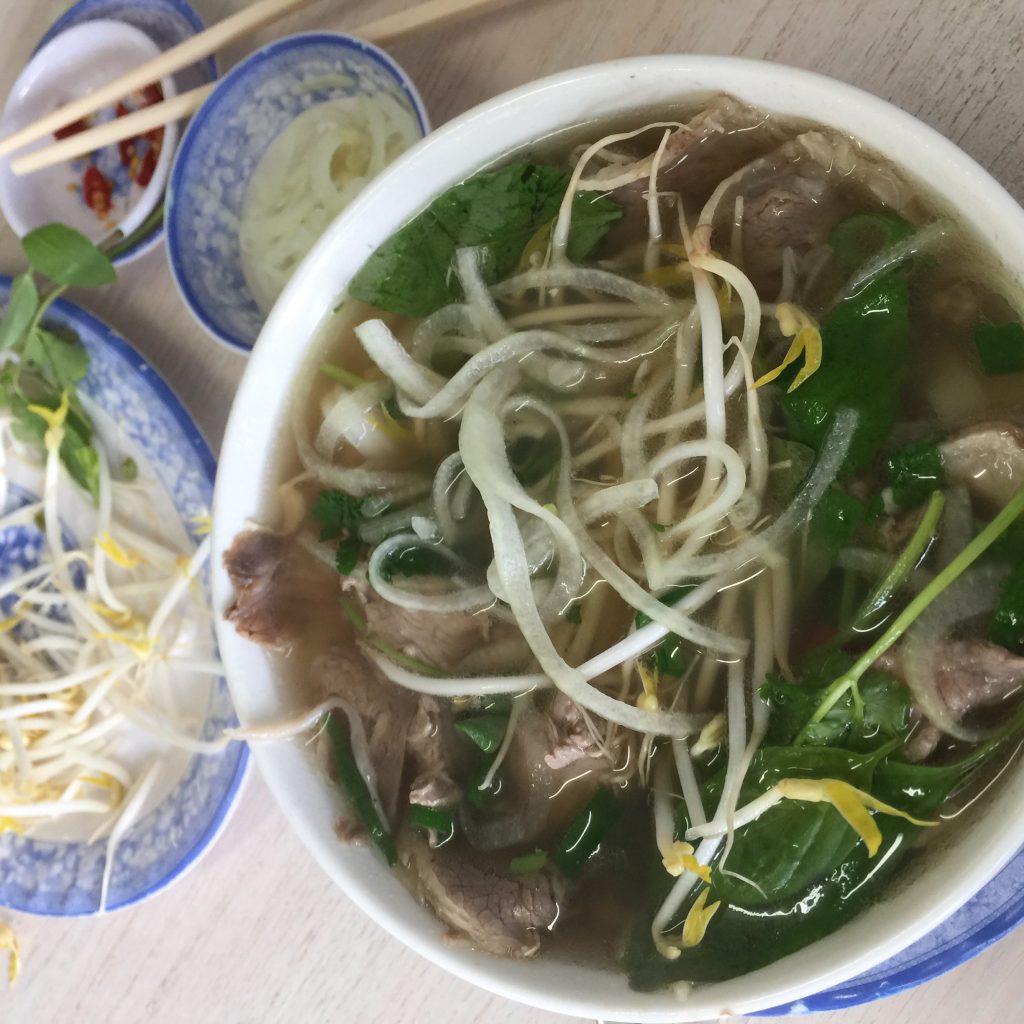 I have never ordered a large serve and never seen the bottom of my bowl. But, I have often sat in amongst ten people in their middle community table and watched in amazement as tiny slim Australian women of Asian heritage demolish huge bowls of pho. My envy of their genes and slimness, is, I hope not too obvious.

The two favourites beef pho with tripe and tendon and their oxtail are so good, shameful as it might be, there has never been the temptation to experiment into other areas of their menu. It’s all in the broth and I am certain it is their very popular oxtail that is the reason for the superiority of their broth which is rich and meaty without a trace of the tell-tale Maggi stock flavouring that, believe it or not, can be bought on Hanson road in 1kg containers…WTF!

So, beef with tripe and tendon…without saying the plate of bean shoots, coriander, a lot of Thai basil and a skimpy [this is not complaining] lemon wedge, a little dish of fresh chilli and another of raw onion that has been soaked in cold water. There are also condiments on the table of chilli, hoisin/barbecue and soy sauce. I have never been able to establish why they don’t used the honeycombe tripe and sometimes the tendon can still be a little crunchy for my liking and then there’s masses of finely sliced, incredibly tender beef, rice noodles and that absolutely scrumptious broth. At a guess, I don’t expect there is a need to tell any of our readers how this works but just in case. Drop the bean shoots, about half,  into the broth, squeeze out the lemon wedge, rip off the leaves from the coriander and basil and add them to your bowl and push them under with your chopsticks. Now, unless you are a very foolish person do not add more than five or six slices of chilli, mix them around and let them infuse and taste the broth before you start adding more. No one has ever been able to explain to me which chilli they use, and I think the lack of freshness, slight fermentation adds to the heat. Add half of the onion and the remainder when you are a little way in. I try not to think about where the beef comes from. One of my favourite pastimes is to trawl Asian and Chinese grocers and especially systematically go through the intriguing contents of their freezers. The bigger stores sell mountains of finely sliced frozen beef that comes from everywhere but Australia…..maybe best not to ask?

Now the oxtail…more expensive and worth every cent it comes with all of the condiments but, there are several tender succulent slices of oxtail that are about 1cm thick complete with untrimmed jelly fat….OMG the only thing that stops me eating it a couple of times a week is my doctor keeps telling me my cholesterol is through the roof and I know he wonders if I eat my own cooking…bummer! In the almost two years I have lived south of the city and spent a good deal of time exploring the interesting areas I have eaten at a lot of pho shops …nothing competes with Pho Minh. The duck shop in the same complex is worthy of its own review…and also comes recommended. 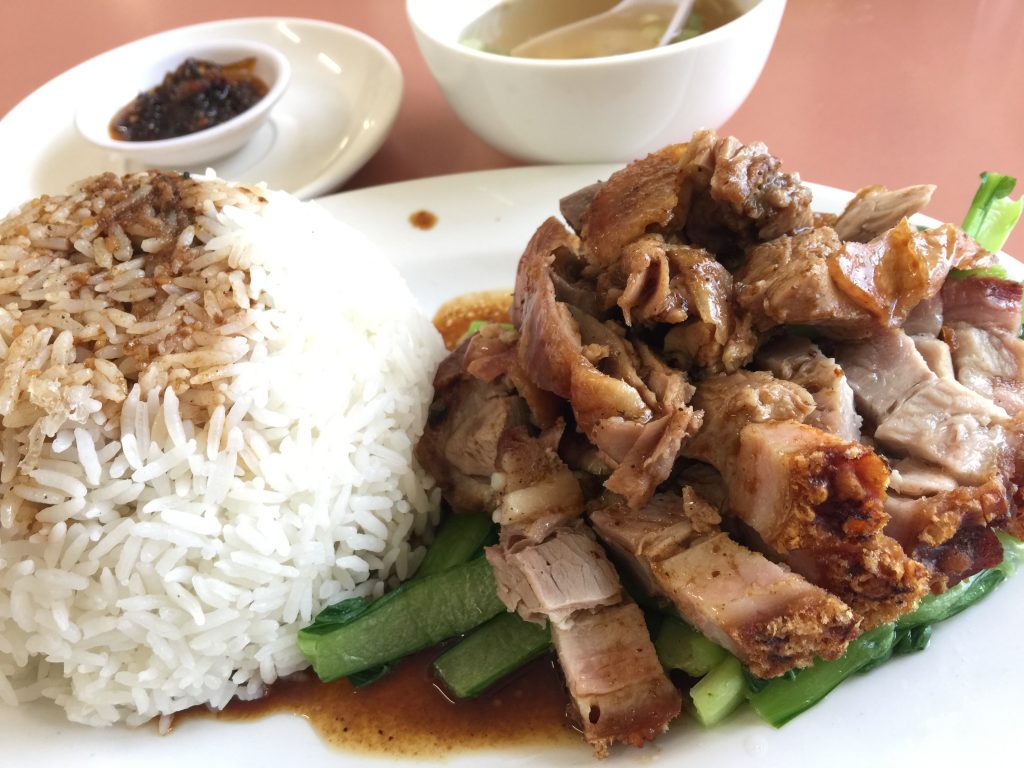