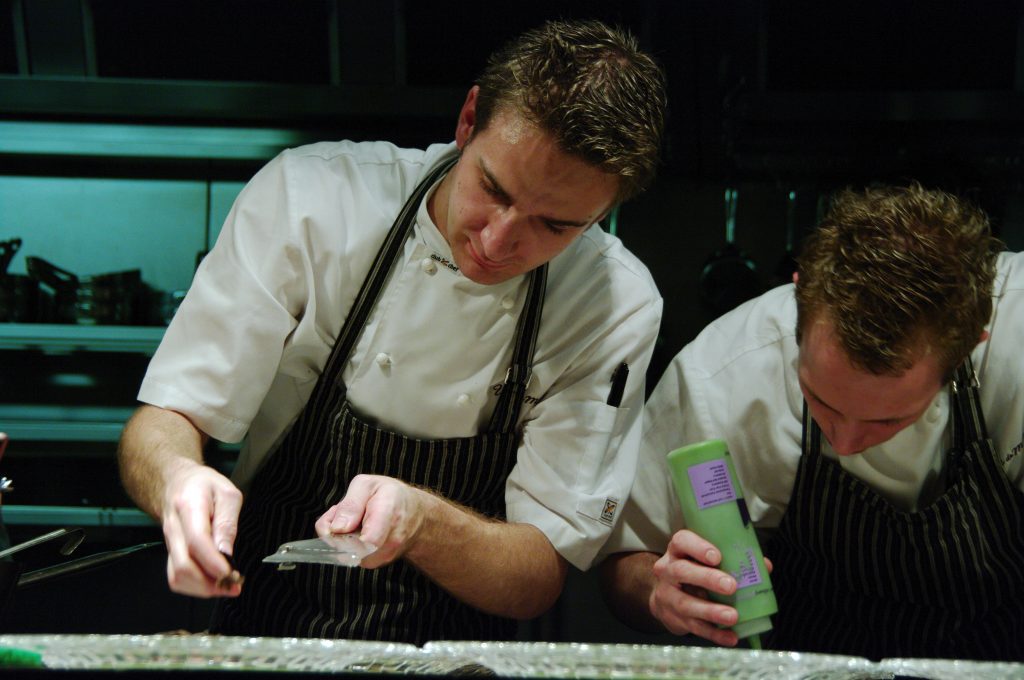 The first time we received Australian truffles was incredibly exciting. Prior, my only experience with truffles had been in France, in Michelin three starred restaurants, at the height of the European truffle season. Doing estage at the then Michelin three starred Marc Menau’s L’Esperance, my enthusiasm to learn about their preparation was quickly dulled after having scrubbed the most fabulous, pongiest biggest truffles with a new Oral-B toothbrush in freezing cold water for two consecutive days. My fingers were blue and the skin was broken and bleeding. They were scrubbed over a sieve that ensured every minute crumb was harvested; these of course went into Menau’s fabled Kromeski.

The truffle seller was mysterious and highly respected; we never saw the dog or the pig, but his skills at providing fabulous quality were legendary with this kitchen. The next stop for a brief estage was Les Crayères when still under the command of the legendary chef Gerard Boyer. The entire kitchen was entranced with the appearance of these little baskets of gold. At Les Crayères, the night before I started work in their kitchen I ate in their restaurant…the truffle shaved at the table was an entirely new and exciting experience for me and the aroma is one I have never forgotten…earthy, pungent, exotic like no other smell I had encountered before or since.

The history of truffles throughout the world is a marvelously exotic story. Early British travellers to the middle east like Sir Richard Francis Burton and Gertrude Bell are just two amongst the many who became entranced with the land and its inhabitants.

Their frequent mentions of white truffles in what is now Iraq, is well documented and the Bedouin are known to still harvest these truffles in quantity. We have often wondered if these apparently excellent white truffles make their way via the black market into the famous  white truffle markets of Italy.   In 2003 when travelling in Jordan along the border of Syria and Iraq with Yazan Akeel [e’cotel Australia] we encountered story after story confirming their existence, but, forbidden by Akeel’s father to travel to Bagdad, we went to the Amman railway station where the ‘terror taxis’ did the constant trip between Amman and Bagdad for just $80 USD.  We set about investigating the chances of them bringing back truffles for us. Sadly, the season started after we left, but Akeel’s parents bore testament to the truth of these rumours, when kilos of excellent white truffles arrived at their doorstep. Sadly, no amount of ingenuity could get them legally into Australia. Undoubtedly, there were dinners in the Akeel’s Amman home using white truffles to a degree that we could only dream of.

Truffles are abundant in China but they have firmer cork texture without any of the mazing  intense flavour and aroma and are inexpensive by comparison and high end chefs still seek their truffles from the European markets. This is not to say that this market will not develop into a major player on the world truffle stage and we will be watching this market with the help of friends working in Shanghai.

The first Southern hemisphere truffles were harvested in New Zealand and it was some years later that the first commercial truffles appeared in Australia’s best restaurants in 1999. For Australian chefs it was not just exciting but a turning point. We were skeptical…and in hindsight rightly so, because it has only been in very recent years that Australian truffles have delivered the intensity of aroma of the best truffles of Europe. Like wine, the truffle season delivers years of varying quality.

The Australian truffle industry has grown exponentially in the last 20 years and whereas once they were mostly from Tasmania and Western Australia they are now also found in New South Wales, Victoria and South Australia. The wine industry in the latter three states has been instrumental in the mass planting of inoculated trees, a secret closely guarded from truffle rustlers. Before you hope that with the abundance of Australian truffles now in some instances comparing to the highest quality French and Italian truffles that the price might lower…think again. The Australian truffles will be fed into the European market fulfilling the dream of European chefs to be able to serve fresh truffles all year round.

As close as June 22, 2018 I was astonished to see on the ABC’s Gardening Australia a truffle producer talk about size not mattering….REALLY!!! This so wrong and you don’t just need to believe us, we urge you to read the scientific articles listed at the end of this post. Size does matter and equates to aroma and endorses the reason why chefs and purveyors go nuts for the really large truffles in the Australian and international markets.

Those little jars with small truffles found throughout Italy that lure tourists to buy them as gifts are in fact the rubbish truffles that would otherwise go to truffle salsa which is generally liberally infused with fake synthetic aroma sand mushroom. They would never be served in any decent restaurant. Our advice is don’t waste your money!

Buying a truffle that is less than the size of a walnut is to misplace your money. Rather buy a piece of a large truffle.
Always smell the truffle and reject any truffle with a winey sour smell.

Check the skin of the truffle for miniscule signs of mould which is often also indicated in the changed aroma…this mould cannot be washed and brushed out as it will already have permeated the truffle.

Many years ago, when working on another truffle story, an Adelaide chef rang me inviting me to come and look at the huge truffle he has purchased. I looked at it utterly dismayed..yes it was huge but it had been stored in an uncovered takeaway, had a shadow of mould over most of it and already was giving off the telltale winey smell, but I knew that this chef would continue to serve this truffle and customers who might never have tasted truffle before would definitely wonder what the fuss is about.

Truffles are washed to remove any soil that is still attached….post washing keeping them dry is vital. The reason they are very often stored in rice is the same reason that rice used to be put in salt shakers. Rice is a moisture absorber and will until it hydrates stop the truffle from going mouldy…best to bury the truffle in the rice, but not advised for long periods.Yes, some of the aroma is lost to the rice but of course the rice can be cooked.

We are not fans of freezing truffles as we think that thawed, even slowly in the chiller or fridge over night, it changes their texture.

Our preference is to ensure that they are completely dry and then brush them, filling every crevice with molten clarified butter…allowing it to set and repeat the process several times. When set, put into a vac bag add a small amount of more clarified butter and vac hard. We have stored truffles in this manner for up to 10 weeks at 3°C…the texture remained excellent and of course the infused clarified butter was put to good use.

In my early days of cooking I could certainly be accused of complete stupidity, thinking that if I did something whacky no one would actually notice that I couldn’t cook…..wrong!!But, many chefs in search of the new put their truffles to poor use and the worst of this is, in my opinion, truffle ice cream.

There are dozens of great chefs who have shared their recipes for truffles. Wearing a bias for the French kitchen on my sleeve there is no better resource than Larousse Gastronomique.

It is dismaying, that chef’s throughout the world, are frequently so poorly educated about the products they use. In the instance of truffle oil they frequently know so little that they are willing to pay four times the price of a good olive oil for truffle oil. Because of the risks of severe food poisoning, truffle oil, is in fact an oil infused with a synthetic aroma that is easily detected by a good palate and nose. In all honestly, you could probably get a similar aroma for the unknowing by adding a freshly dug garlic clove to a good oil. So next time you are in a restaurant and asked to pay double the price because a dish is doused in truffle oil we urge you to resist the temptation to order it, and, instead keep your dollars for Australian crayfish or the perfect air-aged grass-fed steak. Maybe, even consider another restaurant and chef, because just using truffle oil might be considered an indication of the intelligence of that chef and their food.

scientific reading about the truffle

There are hundreds of books about truffles but this slim and stylish volume takes on the truffles of the world. Finally there is more than a vague reference to ’desert truffles’ still bought back to Jordan from Iraq by taxi driver’s who risk their lives for $80 to get them. China where a thick slice of foie gras and lashings of truffle is a reminder of what France used to serve. Australia even gets a mention.

Best the recipes are simple classics, some from my favourite authors including Alice B. Toklas’ Truffle Turnovers. Please note even the hot Italian recipes use butter to our great approval as butter and truffles have a symbiotic relationship. A good read and great recipe section for a truffle virgin (or addict) to ’black gold’.