We are South Australians and consider ourselves blessed to enjoy, in season, some of the best oysters in the world. As passionate oyster eaters we have convinced many diners over the years who have sworn off of eating oysters that they are actually a miraculous food.

I have railed for years against restaurants that serve oysters out of season. More eaters are put off of oysters, often for the rest of their lives, by eating them when they are spawning…akka out of season. They taste disgusting…metallic, bitter, unpleasant, absolutely nothing like an oyster in peak season.

In 2018 for the first time we have been forced to sometimes wash our oysters when opening them. The shells have been super brittle. In many instances, it has been impossible to avoid getting shell everywhere. If you are forced to do this, use filtered water and do not cut the muscle until you have washed the oyster. Change the water after every couple of oysters.

In 2011 I met a Frenchman in Shanghai who proudly showed me where he had cut half of a finger off opening an oyster in France’s most famed oyster region Normandy. They threw the finger into a bucket of ice and rushed him to the local hospital where they sewed it back on. Yes, the miracles of modern medicine and why today you so rarely see a butcher missing a digit. When I was a child, yes, a bloody long time ago not many butchers had all 10 complete fingers.

I have had a mesh glove for at least 25 years [the same one] and without it I doubt that I’d have any fingers left. It has outseen several oyster knives, my favourite the Dexter Russel. In restaurants, there is this tough boy and girl thing of opening oysters without any protection, but I have to tell you rushing a chef to casualty just before service, because they have a 10-stitch gash, really pissed one off. In fact, it always made me feel like whipping out the duck needle, stitching it up while they screamed like sooky babies and telling them to get on with service. Why would you??? Mesh gloves can be purchased at all commercial butcher suppliers and if you love oysters and want to serve them at their best, meaning just shucked…they are as essential to a cook’s kit as the perfect 30 cm chef’s knife.

Every oyster region will have its own season..the South Australian season generally runs from late March until the end of October. Check out the recipe navigation for more recipes.

Our absolute standby and even when we do more complex oyster dishes we always do a few of these for those that love their oysters plain. 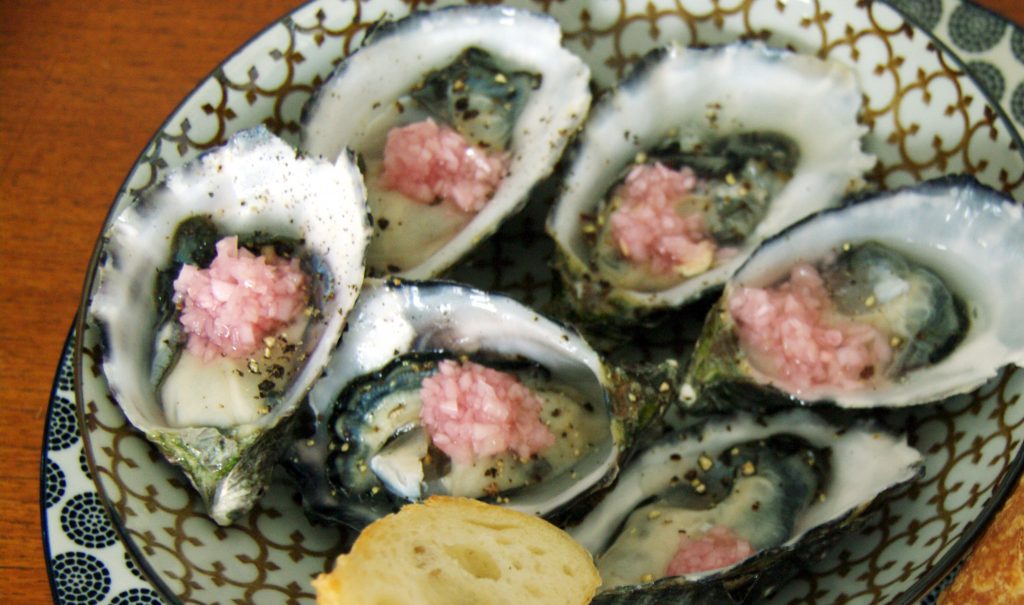 This is too simple to have its own page….finely chopped shallots, Leonardi white balsamic, or strained lemon or lime juice….mixed together and then plenty of black pepper….simple but utterly delicious!