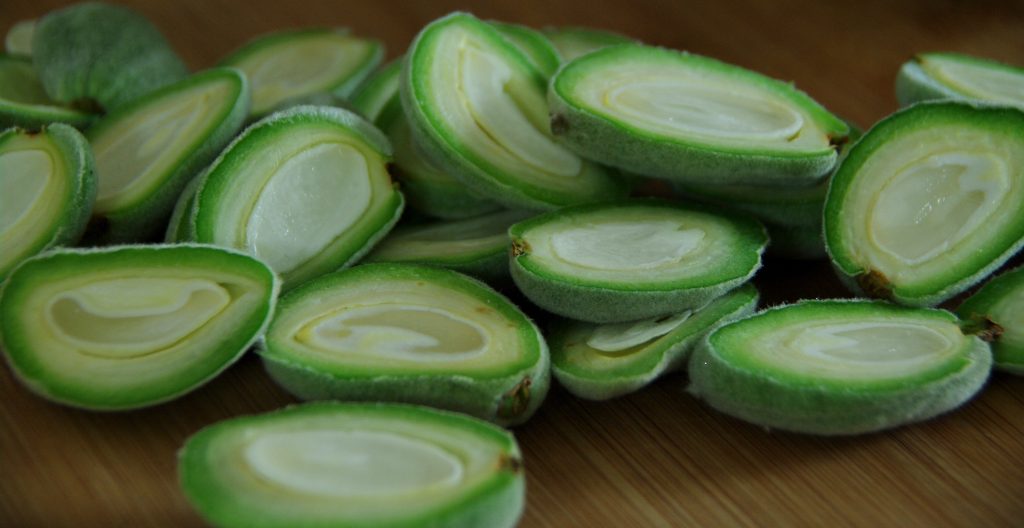 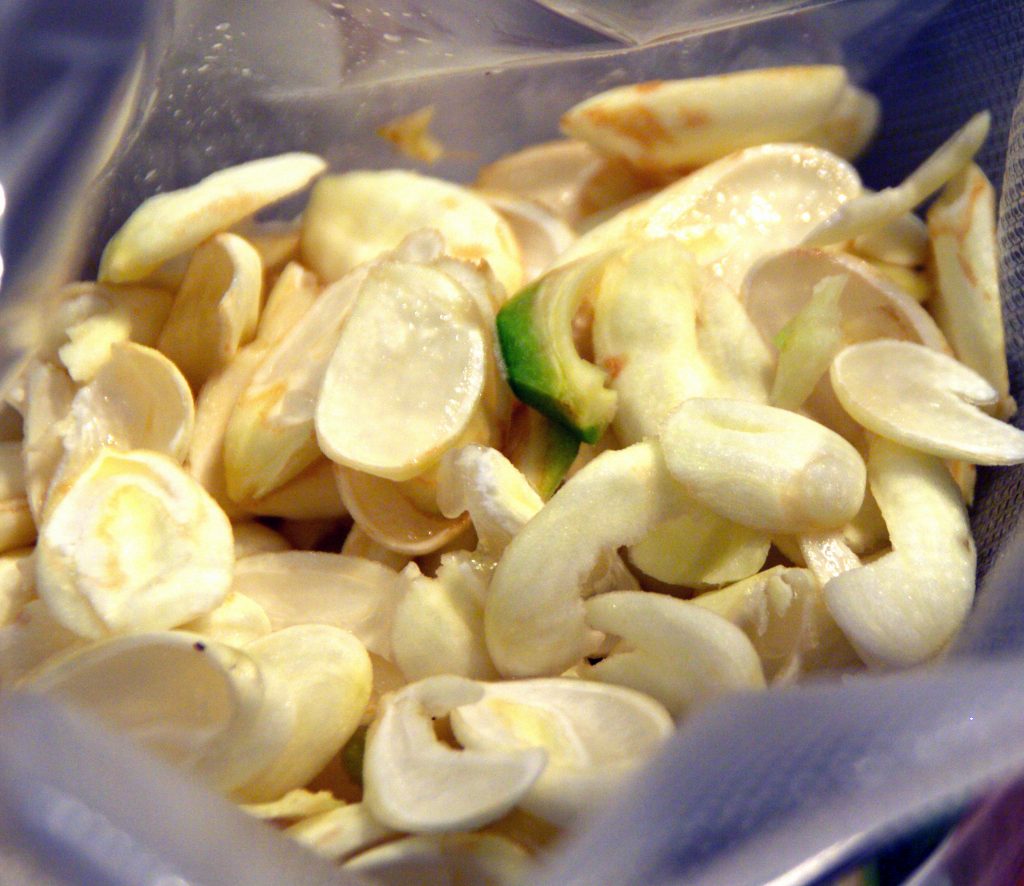 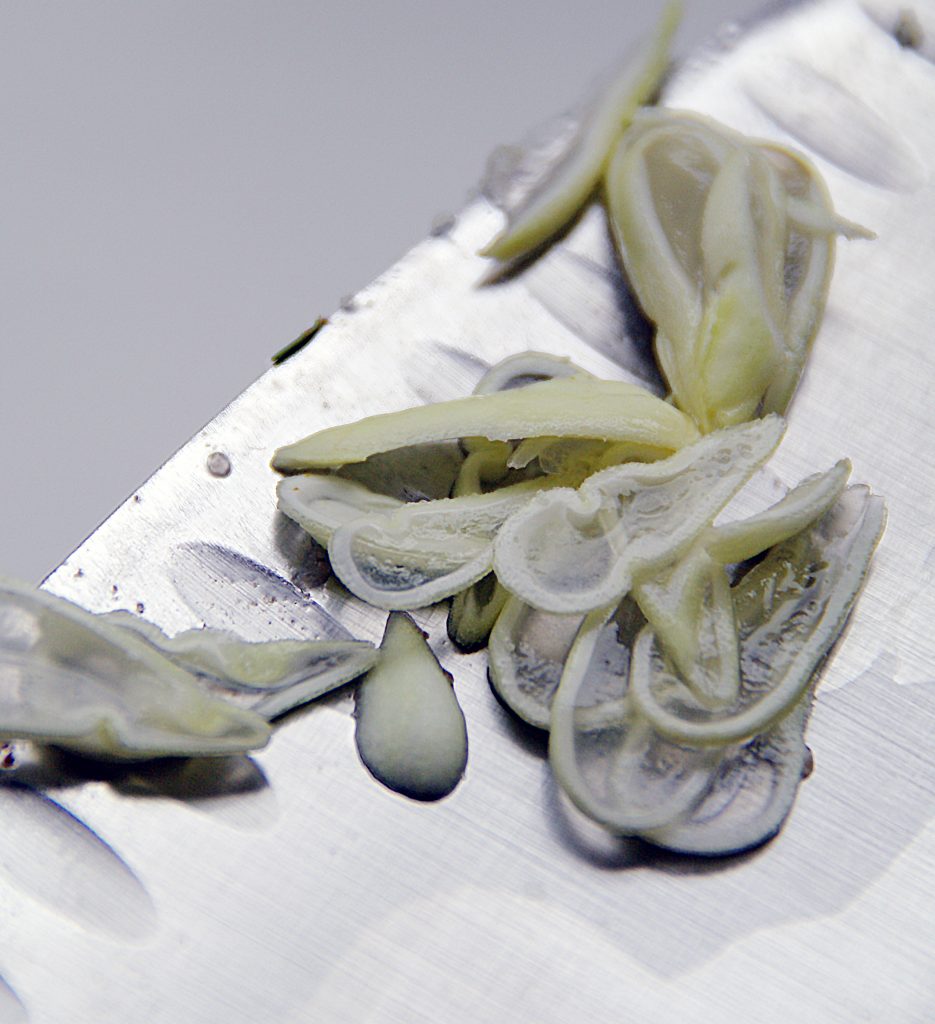 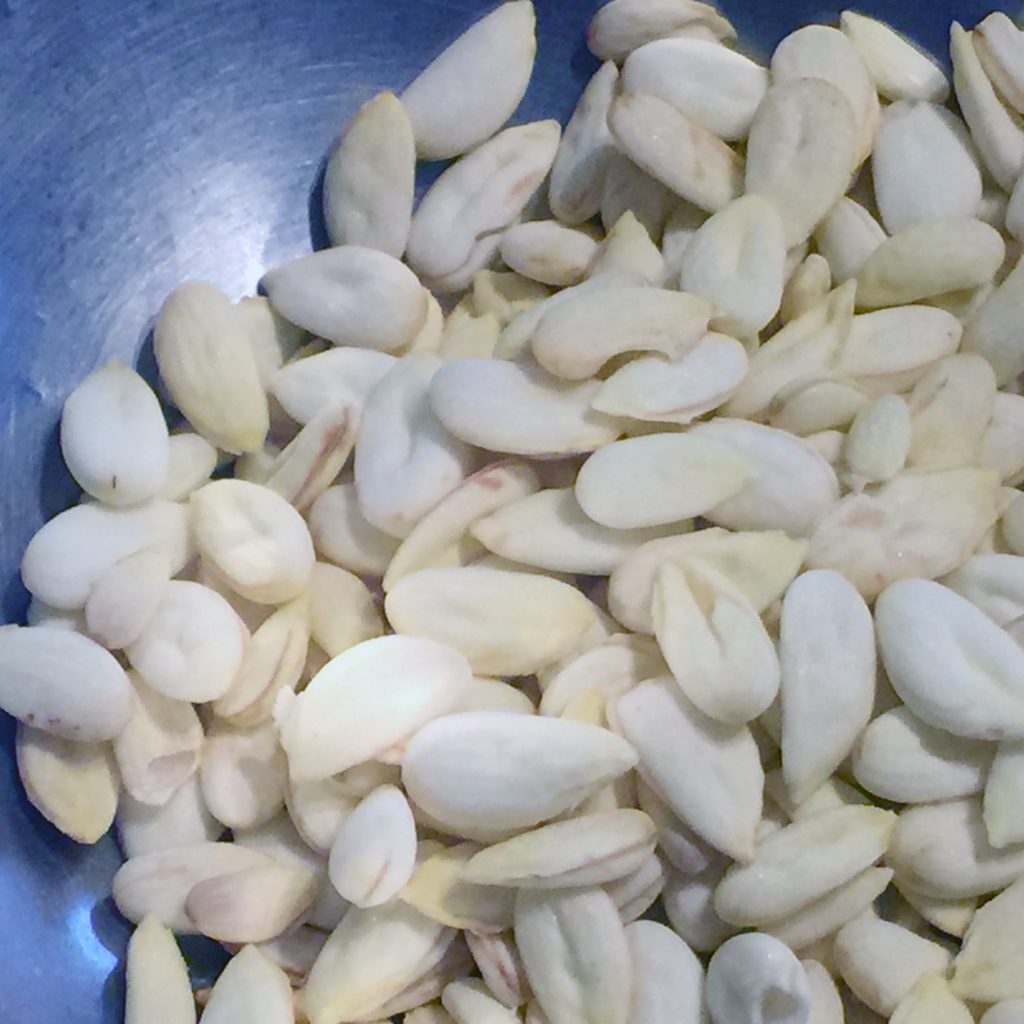 Green almonds are mysterious in modern Australian cuisine because there are so few culinary references. They also hold a special fascination because they have such a very brief season. That season can be compounded by many things. A hot spring that sets the nuts quickly.  A dry season in Australia hungry parrots will decimate an un-netted crop and demolish it in minutes. Amazingly the 2018 season in South Australia has given us the first abundance of green almonds since I started cooking professionally in 1981. Happily, it seems that the parrots have been able to find preferable food elsewhere.

What does the inner kernel taste like? Very tart, slightly, ever so slightly like apple cucumber…somehow, I can imagine them in a gin cocktail and a couple years ago we made a brilliant green almond liqueur that was used for a dessert for a special dinner. The notes he liqueur will be written up this week.

Previously we have tried Cucumber Gelée p76 from Grant Achatz’s book Alinea, first published in 2008 by 10Speed Press and still in print. Achatz’s restrained use of the inner almond kernel is wise advice because they have a persistent flavour that seems to easily conquer other flavours in a dish.  Achatz’s dish is not just elegant to look at, but utterly delicious. Our experiment with a green almond ice cream was very good. We only used the inner kernel, but now that we better understand the green almond we are going to try using the whole almond. Thus far our crayfish with coconut milk and green almond broth is the best experiment thus far and although it was some years ago remains in our repertoire. It is not only pretty but utterly delicious! click here

Like witlof, artichoke and avocado, the green almond is photosensitive when cut and discolours very quickly. We did try putting them in acidulated water but it spoils the flavour. The best advice is to work quickly in small amounts and in a restaurant throw as many hands as possible at it to get it done quickly.

The Middle Eastern kitchen is mad for green almonds but they seem to only eat the inner kernel. Yazan Akeel from E’Cotel Australia is not a bad cook and often draws on his own culinary heritage of Jordan and Syria…he says they use them in salads. Where ever you use the raw kernerl use it sparingly and slice it very finely so that it distributes throughout your salad.

We have found other references including to slow cook the whole almonds in EVO with aromatics and use them like olives. The references on-line to this dish are particularly vague….however, marinated with aromatics, salt, pepper and EVO they could be vacced and slow cooked at 65°C for at least 12 hours. This would preserve them but also keep their crunch…because of their slight cucumber flavour mint and dill and lemon rind would work well…stay turned because we will be giving it a try.

Because we were lucky enough to be given so many , patiently picked by our friend Christine Baker, herself a brilliant gardener and an even better cook, we have a freezer full of both processed and whole green almonds. This of course gives us a marvelous opportunity to really experiment in a very rare amazingly abundant season.