Astonishing that in 67 years of flying [my first flight at just three years old] never have I encountered such terrible food.

Everything was square shaped, and the menu description never identified the dish…. The first meal was astonishing. A red cabbage slaw with absolutely no seasoning and quite inedible, the main chicken breast cooked way to long [especially so if you want to reheat] chopped up in varying sizes and rolled through some sort of non-descript curry-ish sauce, turmeric rice, again not seasoned and well over cooked with some nasty frozen peas and corn that came from who knows where….next the chicken sandwich turned out the be a disgusting sort of sausage roll that oozed grease and the sweet portion also warmed in the same box wasn’t even tasted because one could be certain that the rank smell of the chicken would have permeated. A breakfast pancake [which was correctly described on their menu, but not by cabin staff] turned out to be an overly sweet sort of bread and butter pudding [pictured below]…nasty!!nasty!!

Another breakfast a cheddar omelette [also rectangular and pictured below] resembled nothing I have ever tasted.  The crumpled croissant was a about the most edible thing in 20 hours but again overly and unpleasantly sweet. Equally, I don’t get the penetration Yoplait has in the international yoghurt market when there are just so many better brands. 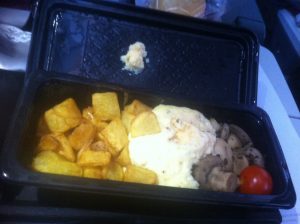 Begging for water dispensed in paper thin plastic bottles required holding them away from you to open as water inevitably gushed all over one.

One of our number flew First Class, another business and both bemoaned the inedible food on their flights.

I get food budgets I’ve doing it for 37 years…but surely some imagination and adhering to simplicity could vastly improve their food offering.

Other stuff about flying with Qatar

The rule of toilet housekeeping is not adhered to and instead of thick paper towel to dry one’s hands there are tissues that pour from the box in great unnecessary wads. The supposed hand towel is positioned incorrectly so that it is impossible not to splatter the toilet seat making it looked like some careless sod peed on it.

Service was civil, just barely on the Adelaide to Doha leg, were cabin staff thought absolutely nothing of continuing to fill their trolley when it would have taking two seconds to let me through. Service did improve greatly Doha to Paris!

The excess of disposable plastic is just another reminder of what we are doing to our planet and perhaps the Chaser crew would like to salvage and take on the waste from a single day…I suspect it might fill the plane.

Oh…well, we got off the plane starving and thirsty and put that hunger and thirst to immediate good use…more tomorrow!